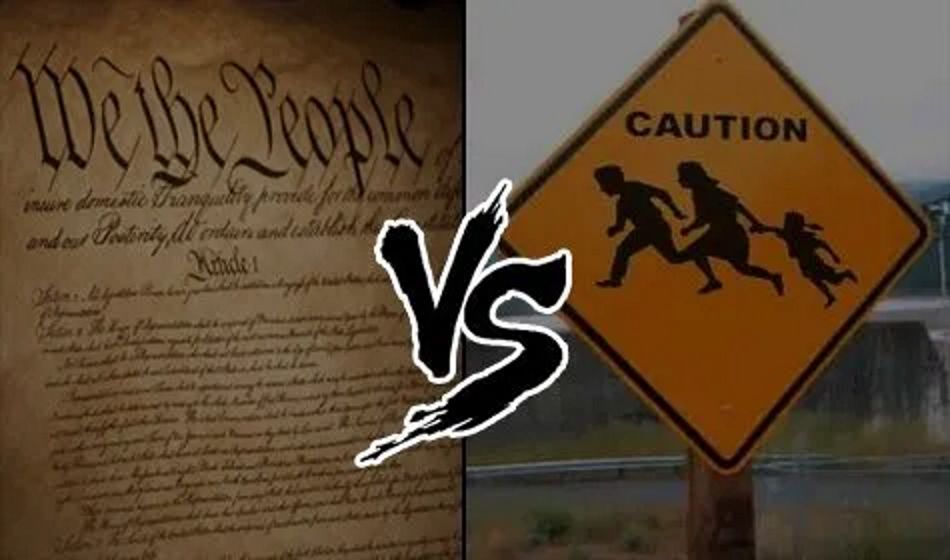 Migrants from 160 countries, including the Mideast and China, are illegally crossing our border.  (Texas DPS)

CRIMINAL MIGRANT ENCOUNTERS ARE ON THE RISE

In just 2 days, the U.S. Border Patrol apprehended the following:

7 large groups of nearly 1,000 migrants each

$300M WORTH OF APPROPRIATED WALL MATERIALS ARE RUSTING IN A SCRAP YARD per Jason Smith (R-MO), U.S. House Committee on Ways and Means and the Budget Committee

If so, then consider doing this:

If you are outraged and want to support a political party with candidates who will stand firmly on the U.S. Constitution to stop this invasion, then make your most generous donation to help us by clicking on the link at the bottom of this message.

DEMAND they “Build the Fence”

Here is the “Immigration” plank in the Constitution Party Platform.

“The United States shall guarantee to every State in this Union a Republican Form of Government, and shall protect each of them against Invasion;”

“When we are considering the advantages that may result from an easy mode of naturalization, we ought also to consider the cautions necessary to guard against abuses … aliens might acquire the right of citizenship, and return to the country from which they came, and evade the laws intended to encourage the commerce and industry of the real citizens and inhabitants of America, enjoying at the same time all the advantages of citizens…”

We affirm the integrity of the international borders of the United States and the Constitutional authority and duty of the federal government to guard and to protect those borders, including the regulation of the numbers and of the qualifications of immigrants into the country.

Each year approximately one million legal immigrants and almost as many illegal aliens enter the United States. These immigrants – including illegal aliens – have been made eligible for various kinds of public assistance, including housing, education, Social Security, and legal services. This unconstitutional drain on the federal Treasury is having a severe and adverse impact on our economy, increasing the cost of government at federal, state and local levels, adding to the tax burden and stressing the fabric of society. The mass importation of people with low standards of living threatens the wage structure of the American worker and the labor balance in our country.

We oppose the abuse of the H-1B and L-1 visa provisions of the immigration act which are displacing American workers with foreign. We favor a moratorium on immigration to the United States, except in extreme hardship cases or in other individual special circumstances, until the availability of all federal subsidies and assistance be discontinued and proper security procedures have been instituted to protect against terrorist infiltration.

We also insist that every individual group and/or private agency which requests the admission of an immigrant to the U.S., on whatever basis, be required to commit legally to provide housing and sustenance for such immigrants, bear full responsibility for the economic independence of the immigrants and post appropriate bonds to seal such covenants.

The Constitution Party demands that the federal government restore immigration policies based on the practice that potential immigrants will be disqualified from admission to the U.S. if, on the grounds of health, criminality, morals or financial dependence, they would impose an improper burden on the United States, any state or any citizen of the United States.

We oppose the provision of welfare subsidies and other taxpayer-supported benefits to illegal aliens, and reject the practice of bestowing U.S. citizenship on children born to illegal alien parents while in this country.

We oppose any extension of amnesty to illegal aliens. We call for the use of U.S. troops to protect the states against invasion. We oppose bilingual ballots. We insist that those who wish to take part in the electoral process and governance of this nation be required to read and comprehend basic English as a precondition of citizenship.

We support English as the official language for all governmental business by the United States.