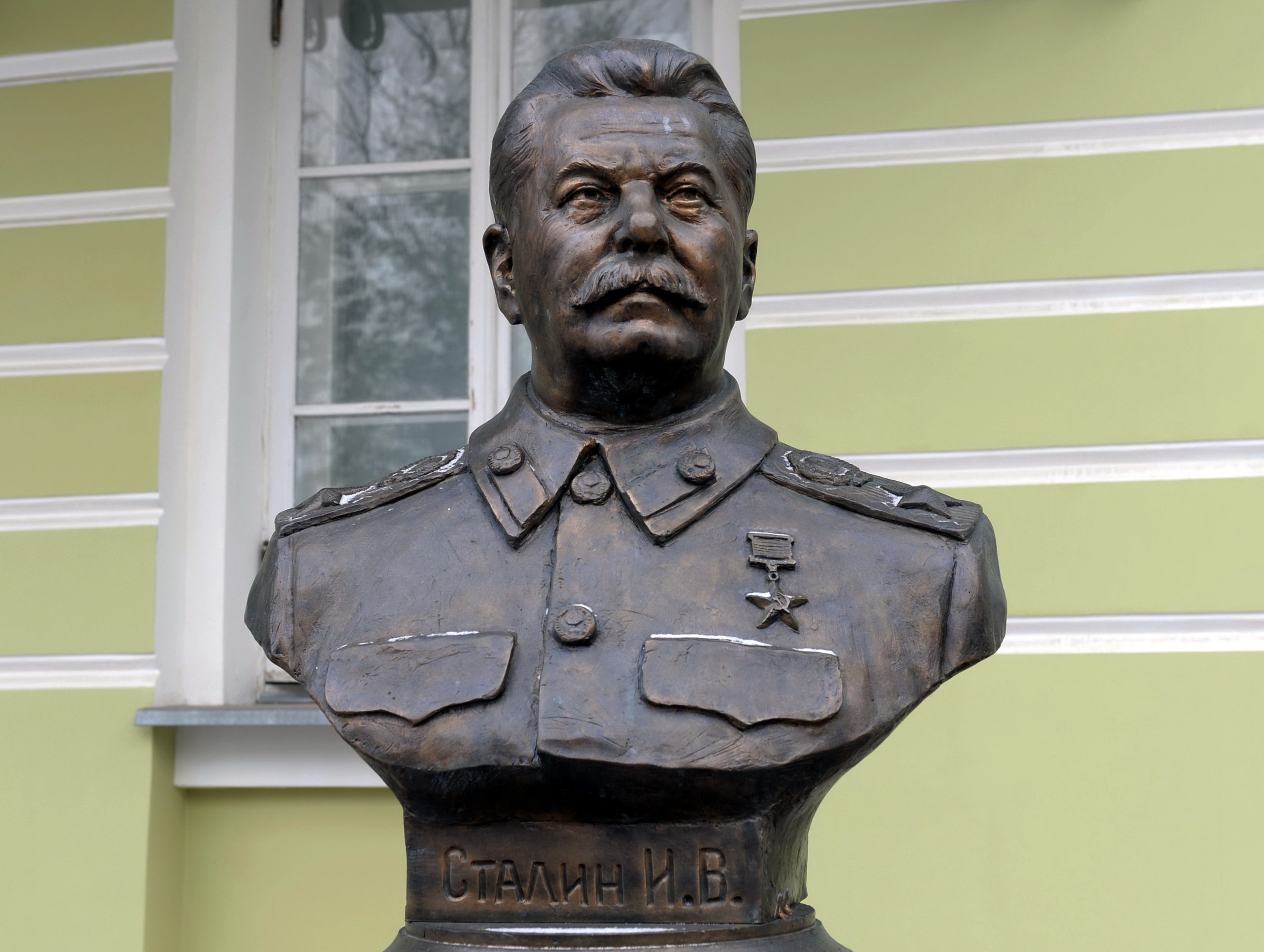 Darrell Castle talks about Democrat efforts to complete the necessary political structure to gain a permanent hold on power.

Hello this is Darrell Castle with today’s Castle Report. Today is Friday the 5th day of February in the year 2021 and in this Report, I will be talking about Democrat efforts to complete the necessary political structure to gain a permanent hold on power. I remind you that what the Democrats are working toward has been done before. In 1937 95% of the Russian people voted and Joe Stalin received 100% of that vote. It was all reported as headlines in the New York Times. Stalin was elected but he had absolute power for as long as he lived.

The Castle family is doing well this week despite all the upsetting political news, we carry on. Earlier this week we celebrated the family daughter’s birthday by Zoom. We could not be together as a family, but we celebrate as best we can, and we are grateful for the video capabilities of Zoom.

Joe Stalin had absolute power and complete control of the voting process and the vote count. Opposition to his candidacy tended not to survive very long. The Democrats in America are not there yet but they are building toward permanent power all the while describing their efforts as unity. They continually ratchet up the tension when they have opportunities to calm it down. Joe Biden and Joe Stalin share some frightening similarities. Joe Biden on behalf of the Democrat Party seeks total power by way of majority control of the Senate, House, Supreme Court, and the Presidency. Stalin did it by purging and executing those he feared as disloyal or enemies.

I have not heard that Joe Biden is executing his enemies or those he considers disloyal, but he is purging them. Joe Stalin was so afraid of ranking military officers that he had hundreds of his most competent officers executed. When the Germans invaded his purges cost the lives of hundreds of thousands of Russian soldiers because they did not have competent officers. Joe Biden had the FBI vett and reject disloyals from the 25000 national guard troops sent to occupy Washington D.C. When Biden’s new secretary of defense took over the Pentagon, he ordered a 60 day stand down of all U.S. military personnel worldwide. The purpose of the stand down was to purge the military of white supremacy and extremism.

The purge came at the same time a general office at the top of U.S. strategic command publicly stated that nuclear war with China and Russia was a real possibility. It sure sounds like the ghost of Joe Stalin wanders through the streets of D.C. Maybe the Democrats are drunk with power, maybe they serve an outside agenda, or maybe Donald Trump forced them to shed their disguise and reveal who they really are. The things I have mentioned so far have all happened in a period of about two weeks so how much worse can it get.

Marjorie Taylor Greene newly elected Republican Representative from the 14th district of Georgia who was elected with 75% of the votes of her district was stripped of all her committee assignments by the Democrat majority house. They did not strip Ilhan Omar or AOC who recently said her life was in danger from the January 6th incident at the capital when she was not even in the capital. The only reason Marjorie has been treated this way is that Democrats do not like her politics, and she will not shut up and be a nice little girl. Once again, the Democrats are building permanent power and they will not tolerate dissent. The next step which is being prepared now for Marjorie is expulsion from congress.

The Democrat COVID Aid bill just passed the Senate by a vote of 50-49 with one Republican dissenting. The bill will fund 1.9 trillion debt dollars for stimulus and for aiding those affected by the virus. By a vote in the senate of 50-49 with one Republican dissenting, each person who is allowed by Democrats to receive free money is supposed to get $1400 by the last count I have. What that means is a couple hundred billion for people to get free money and 1,7 trillion as simple boondoggle money to supporters, banks, airlines, and other vote buying bribes. It is really a totally corrupt, vile and disgusting display of outright graft.

The Democrats have a bill pending to make Washington D.C. a state thus giving them two more senators. It already has 38 senate cosponsors so it appears that the Democrats will soon have two more to add to their majority. I’m sure that Puerto Rico will quickly follow.

The newspapers talk about unity and bringing the nation together, but they don’t really mean it. If you read the body of their articles you will see that unity is not what they want to achieve but compliance. When they say the words “our democracy” what they really mean is everyone in complete lockstep with the left wing of the Democrat Party.

The president signed at last count 42 new executive orders which I believe is a two-week record. I don’t want to go into them again but some of them are fairly destructive of liberty, some are extremely destructive of liberty and all by their very nature are unconstitutional. With President Biden, congress and the senate are becoming just his cheering section.

At least 73 million people voted for Donald Trump that we know of, and those people are the ones who must be made to realize total defeat and humiliation. They want the Trump supporters crushed into the dirt to impress upon them who runs this new world. Donald Trump, once the presumed most powerful person in the world now can’t even send a tweet. If it is any consolation, I have concluded that unelected billionaire oligarchs actually run the world with Democrats acting as their agents. Why do I think such a thing? I do so because I have listened to videos of people such as Bill and Melinda Gates, and Ted Turner saying those same things.

The Democrat Party, however, appears to be completely terrified of the thought that Trump could ever rise again. I suppose that extends to his followers as well so they must be made to accept his defeat and humiliation. They are trying to impeach him retroactively. They want to deny him secret service protection, they want to prohibit any memorial to his presidency including the writing of any books by him or his staff. The City of New York wants to take away his right to run the Central Park ice rink. The City of Palm Beach, Florida wants to deny him the right to live in a home he owns there. Banks and other financial institutions have ended their relationship with him. How long before all this intimidation and harassment extends to anyone who voted for him.

Once again, I point out that when Lenin and later Stalin gained absolute power in Russia, they took steps to erase all memory of Czarist Russia. Thanks to the work of Leo Tolstoy and others they were not totally successful. To illustrate Democrat fear more clearly, just look at how they have turned the nation’s capital into a militarized city. I remember when any American could go to Washington and walk right into the capital to look at it. That building was the capital of all the people not just the Democrats. Now a fence topped by razor wire keeps out the deplorables.

The place Donald Trump called the swamp is seething with anger and a desire for revenge. That must explain all the efforts to punish and humiliate Trump voters. The administration doesn’t seem to mind at all the public perception that what it is doing is unconstitutional and therefore illegitimate. Instead of an effort to restore legitimacy and with-it unity it is full speed ahead on the drive for permanent power. I suppose the feeling is that we don’t care if you hate us as long as you can’t do anything about it.

The final item I have time to talk about in the drive for total Democrat control made permanent is the appointment of a commission to study court reforms which can only mean court packing. They want the court, the presidency, the senate, the house, the bureaucracy, by any means necessary. That way there would be no opposition to their agenda.

There is one problem though and that is that their power is concentrated in the blue coastal cities. They have built their majority by assembling groups of minorities in the coastal cities and a few interior ones often by illegal means as is traditional with Democrats. They did it by illegal immigration from the third world, and by putting all those people in their cities on the government dole because they have no jobs for them to earn actual wages. When you can destroy the economy so that everyone loyal is on the dole of stolen money that is a pretty good racket.

Finally, folks, it would take real energy, intelligence, motivation and most of all, guts to even begin to solve these problems. Those are all attributes sorely lacking in Washington D.C. today. Joe Biden can be proud though because he has helped bring about the end of the American experiment in self government and individual rights. He has appointed many Czars such as climate Czar, they can make solar panels, John Kerry. Why not just make himself actual Czar then he could really be Joe Stalin.